The work on deepening ventilation shaft IV has been completed in the Pniówek mine. This is a very important investment project for the mine. It will enable the colliery to safely continue to develop level 1000 of its western section, and in the future, begin the construction of level 1140. 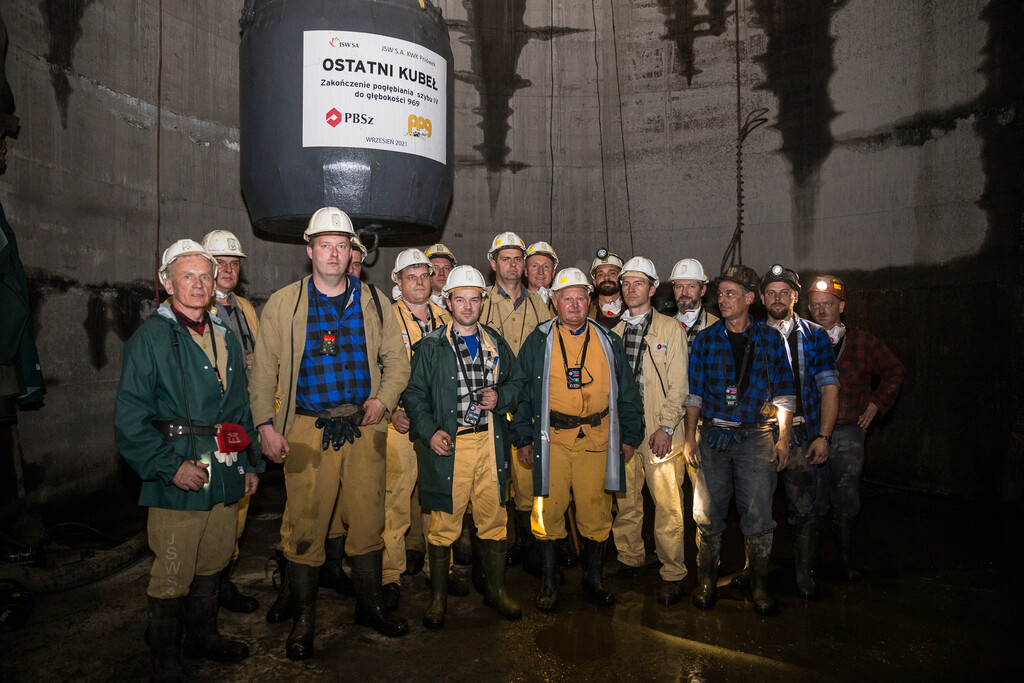 The work on shaft sinking began in 2017 and was divided into two stages. In the first stage, the shaft was deepened from the level of 705 to 855 meters. In the second stage, which ended just today (24 September 2021), the shaft was deepened to 969 meters. On this occasion, a traditional modest ceremony was held at the bottom of the shaft. Representatives of the contractors, i.e. PBSZ S.A and PPG "ROW-JAS", submitted a special report on the completion of the task to the technical director of the mine. Later on the report, along with a bottle of good alcohol, was placed in a special metal capsule, which was then sunk into the concrete in the bottom of the shaft.

– I would like to thank all the staff involved in this difficult, specialized job. We managed to complete the work as planned, although we worked in the difficult time of the pandemic – said Marcin Mieszczak, acting President of the Management Board of PBSz.

The completion of shaft IV means safer and more efficient mining of the coking coal seams located in the western part of the Pniówek mine. – Shaft IV is an upcast shaft and is used to extract air from areas K-3, C, N-2, N-1 and K-1, among others. Thanks to the investment project, the ventilation path in this area of the mine has been significantly shortened, which will make ventilation more efficient. The project will enable us to reach the coking coal seams in the areas where approx. 20 more longwalls will be mined –said Marcin Mikołajczyk, technical director of KWK Pniówek.

In addition, during the sinking of the shaft, the mine began the removal of many kilometers of workings that had previously been used for ventilation. The shortening of the airways has contributed to simplification of the ventilation network. This has significantly contributed to lowering the level of methane and temperature hazard in the areas of the mined longwalls. The investment project will also enable the mine to reduce the costs related to the maintenance of many kilometers of workings.