Budryk's skiers on the podium

The KWK Budryk team won the third place and the Cup of the President of Polska Grupa Górnicza in the mining giant slalom championship. One of the mine’s contestants, Tomasz Pająk, won the title of the fastest skier in the competition. 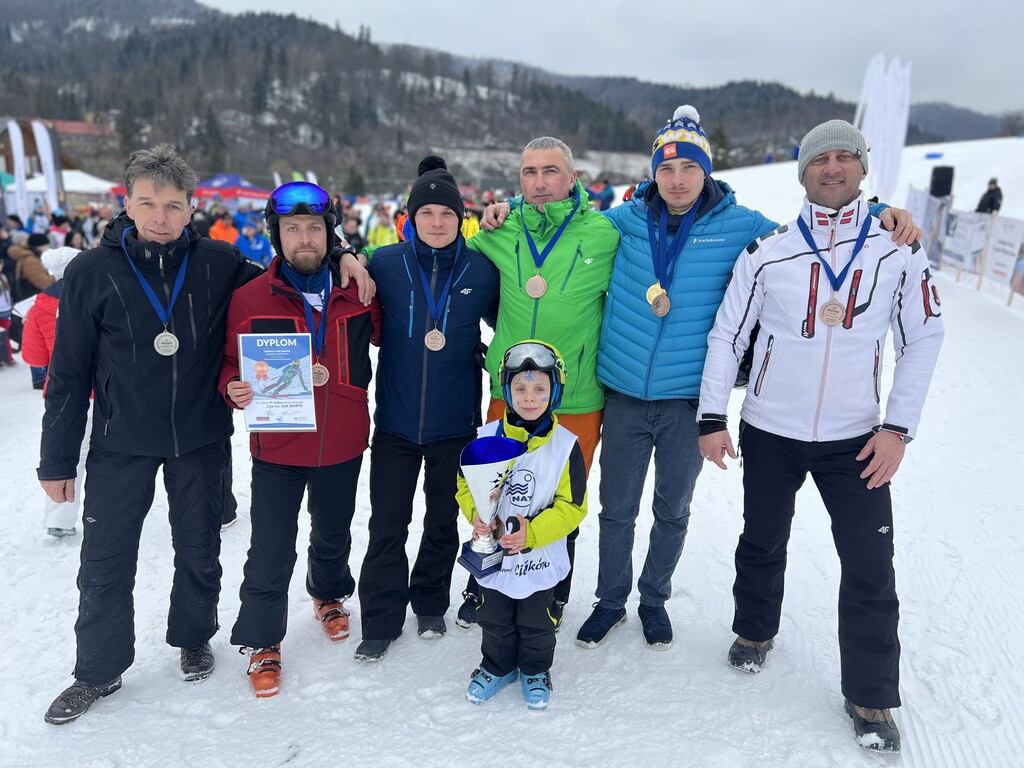 The championship, held under the honorary patronage of the Minister of State Assets, attracted 16 teams from 3 Silesian mining companies. JSW was represented by 5 teams. The most important trophy in the competition, the Cup of the Undersecretary of State, Government Representative for Transformation of Energy Companies and Coal Mining, went to the KWK ROW I team from Polska Grupa Górnicza. The second place went to the representatives of the same mine, the KWK ROW II team. The third place on the podium was won by miners from Budryk: Tomasz Pająk, Arkadiusz Nauman, Tomasz Wąsiewski, Marek Wojna and Maciej Miketa.

The miners' giant slalom took place on Saturday, 5 March, on the slope of the Cienków Ski Station in Wisła. There were 170 competitors on the start line, competing in 10 age categories. Only Tomasz Pająk, the winner of the individual classification, managed to break the 30 seconds barrier with a time of 28.06 seconds.

"I didn’t carry out any particular preparations before the championship, because it’s hard to consider a few recreational skiing trips to the Beskidy Mountains as such. I like skiing and that's how I see this success," said Tomasz Pająk.

Among women, the fastest skier in the giant slalom was Dorota Powieśnik, a wife of a miner from KWK Jastrzębie-Bzie. In the youngest girls’ category (under 12) the podium was dominated by representatives of JSW mines.  Marta Grzomba (KWK Knurów-Szczygłowice) took the highest place on the podium, Martyna Mazur (Zofiówka Section, KWK Borynia-Zofiówka) was second and Patrycja Wąsiewska (KWK Budryk) was third. Amelia Wojna, representing the Budryk mine, was unrivalled among teenage girls. The winner in the same age category among boys was Piotr Bąk, representing the Borynia Section of KWK Borynia-Zofiówka. From the same mine, but from the Zofiówka Section, the best time in the over 41 age category was achieved by Rafał Mazur, and in the under 30 category - by Tomasz Pająk, the fastest competitor of the championships. The family of Budryk's representative, Maciej Miketa, will consider Saturday's competition as exceptionally successful. His 6-year-old son Filip won the cup for the youngest and his grandfather Piotr for the oldest competitor. "Our family has always loved skiing. This passion has been passed on from generation to generation. Myself, I put on skis at the age of 5 under the watchful eye of my father and, as you can see, my son is successfully continuing this family tradition," said proud father, Maciej Miketa.

The aim of the competition is to integrate the mining community through winter sports, which was particularly important this year after last year's pandemic. The championship is a family affair so, as befits this type of event, its organizer, Nadwiślańska Agencja Turystyczna, has prepared many attractions with a view not only to skiing rivalry. The weather was great, so this year's competition, in the unanimous opinion of the participants, can be counted as successful. "Jastrzębska Spółka Węglowa has also contributed to this success, as we are proud to have it among the sponsors of our championships," said Aneta Poraniewska of Nadwiślańska Agencja Turystyczna.