Champions of Poland at JSW

Today (8 April), the JKH GKS Jastrzębie ice hockey team – the newly anointed Champions of Poland – met with the President of the Management Board, Barbara Piontek in front of Jastrzębska Spółka Węglowa. JSW is the main sponsor of the club. 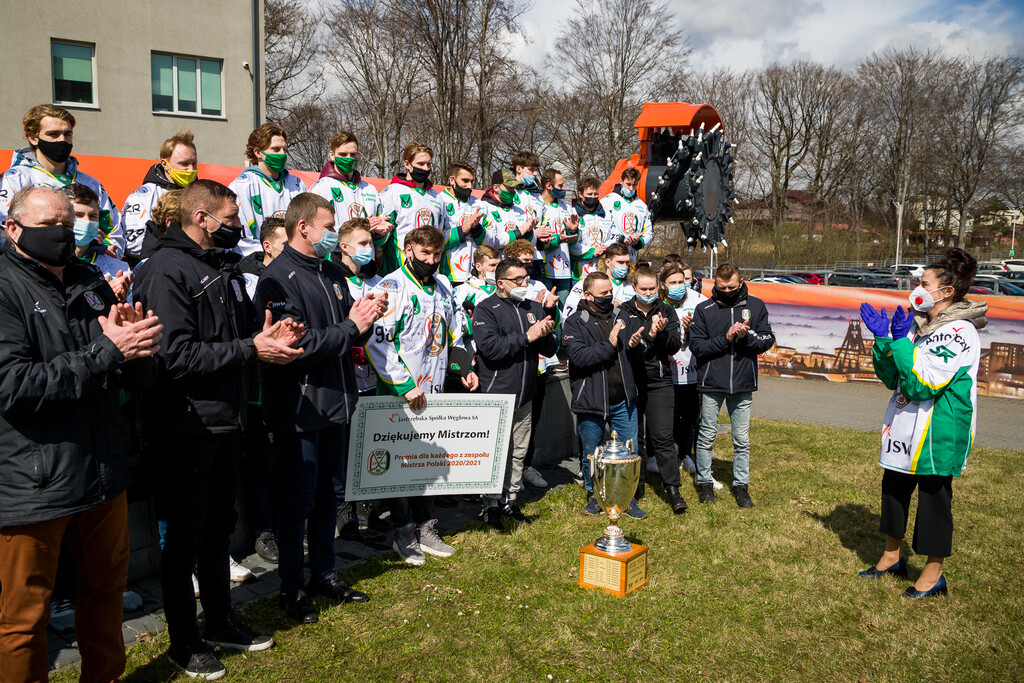 Barbara Piontek, President of the JSW Management Board, congratulated the team on the very successful season, primarily the first in the club’s history title of the Champion of Poland in the 2020/2021 season.

– On behalf of our employees, the JSW Management Board and on my own behalf, I congratulate you on the first in the club’s history Champion of Poland title. Jastrzębska Spółka Węglowa has had strong ties with Jastrzębie ice-hockey from the very beginning. I’m happy that our cooperation brings such spectacular effects. Thanks to our support and your determination and the good club organization we can celebrate the success together. I’m happy we can play in the same team – said Barbara Piontek, President of the JSW Management Board.

The President handed over to the team a symbolic check with a bonus for the whole team of the Champion of Poland. The check was collected by Maciej Urbanowicz, JKH GKS Jastrzębie team captain. – We are happy with the success and we would like to thank you for the bonus and the support of Jastrzębska Spółka Węglowa. Without the company and its employees we would not be where we are. Together we can achieve a lot – said the JKH Jastrzębie captain.

Let's recall that Jastrzębie ice hockey has not had such a great season in its history. In the 2020/2021 season Robert Kalaber’s players won everything that could be won – the Polish Super Cup, the Polish Cup and the desired championship of Poland.